Back to News
Stories 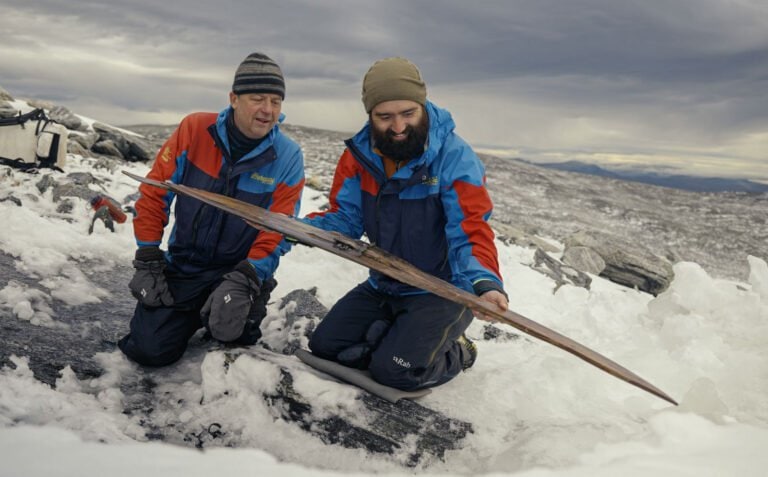 Oldest Ever Set of Skis Discovered In Norway

Archaeologists in Norway have found a 1,300-year old ski trapped in the ice. It is the matching ski from one found in 2014 and completes the oldest known set in history.

Back in 2014, the Secrets of the Ice research program found a well-preserved ski in the melting ice of Norway. It dated back to before the Viking age and even included the foot binding.

It was a rare find, one of only two skis with a preserved binding found from before the Viking Age.

Ever since then, researchers have monitored the ice patch, hoping to find the second ski. Now, the matching ski has been found, and it’s in even better condition than the first. Lars Pilø described it as “an unbelievable find.”

Secrets of the Ice is a research program run by Norway’s Innlandet county. The team investigates several archaeological sites at-risk of damage due to the melting of Norway’s glaciers.

We’ve previously covered some of their fascinating finds including ancient hunting arrows and the remains of a Viking-era mountain village.

The newly-discovered ski measures 187cm long and up to 17cm wide. As it was found 4-5cm further into the ice, it’s better preserved than the previous ski. This is likely the reason that the ‘new’ ski is actually 17cm longer than the original.

This could mean a missing piece remains in the ice, or it could simply be a mismatch. Skis were not mass produced 1,300 years ago!

Lars Pilø explained more: “The foothold of the new ski shows repairs, so it was well used. A part of the back end of the ski is missing. The missing piece is presumably still inside the ice. Whether it broke when lost or while inside the ice may be possible to say at a later stage based on a careful study of the edge of the break.”

Just a few weeks ago, archaeologist Runar Hole and his colleague Bjørn Hessen found the second ski just five meters from where the first one was found in 2014.

The ski was firmly encased in the ice, so the team had to leave it behind. A mountain storm and then fresh snowfall hampered efforts to return, but eventually the team was able to return and retrieve the ski before the winter fully arrived.

On 26 September, an expedition team complete with ice axes, gas cookers and packing material set out to Mount Digervarden. Their objective? To free the ski from the ice and transport it back safely.

Buried in the ice

After a three-hour hike, the team arrived at the location to find around 30cm of fresh snowfall. But thanks to photography from the previous visit and GPS navigation, it was possible to locate the ski.

An ice axe was used to chip away at the ice surrounding the ski, but this couldn’t free it completely due to the risk of damaging the ski.