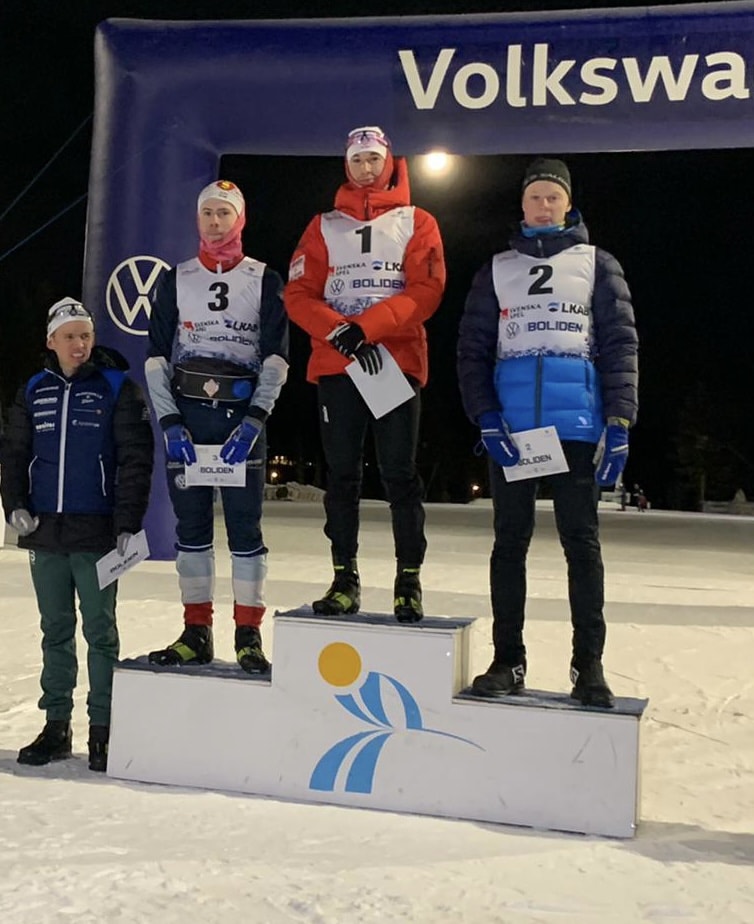 GAELLIVARE, Swe.—Xavier McKeever got his competitive race season off to a golden start by winning his first ever individual junior cross-country ski race in Europe on Friday in Gaellivare, Sweden.

The 18-year-old from Canmore, Alta. rocketed to the top spot on the podium in the junior men’s skate-ski sprint FIS Race at the Swedish opener.

“I am super stoked. This is my first individual win in Europe so it’s a huge confidence builder for me,” said McKeever. “I love skiing in mass starts, and it was huge for me to get back sprinting in the heats.”

The young Canuck secured his spot in the round of 30 head-to-head heats after clocking the third fastest qualifying time around the 1.4-kilometre trail that was rolled out under the lights above the Arctic Circle.

“I think I was a little cautious in the qualifier. I really had no idea what to expect because I have never raced these guys,” said McKeever. “I knew though that in the heats it was going to be anyone’s game. I developed a good plan after the qualifier that kind of worked throughout each heat.”

The composed teen skied with the confidence and podium determination of a cagy veteran, playing cat and mouse with the top junior skiers in Sweden on their turf. Executing his tactics to near perfection while hammering up the steep, punchy climbs and tucking down the slick hills, McKeever dusted the six-man pack in both his quarter-final round, and in the semis, to punch his ticket to the big final.

“It was a bit of a drag race for me in both of the first two rounds. The one guy went for it off the gun and I just tucked in behind him and then was able to make a move and attack on the downhill,” added McKeever, who credited his background in alpine skiing to his golden triumph.

The final was no different. A member of the Alberta World Cup Academy, McKeever made his golden surge off the final downhill and onto the flats just prior to the long, finishing stretch, leaving Sweden’s Theo Mattei and Oskar Algotsson to finish second and third respectively behind him when the dust finally settled at the finish line.

“I had really good skis today and I just wanted to do what I know I can do on the trails and go for the win,” added McKeever following the podium ceremony. “It was a good challenge for me today, especially coming off last year where there were no domestic races because of Covid.

“There were a lot of unknowns last year and I didn’t have a good World Juniors because when I showed up, I wasn’t prepared physically or mentally. So today was really good for my confidence. These were quality skiers. It was a good challenge, and I learned a lot through this experience.”

Fact is, McKeever has been learning the sport of cross-country skiing since his pursuit of excellence in the sport first began at the age of five when he admits he began skiing in “cookie races” that ended with young skiers each grabbing a bag of candy at the finish line.

The son to Olympians Milaine Thériault and Robin McKeever, and nephew of Brian McKeever who is the most accomplished winter Paralympian with 17 medals around his neck, Xavier is the next McKeever to arrive onto the National Ski Team.

His chase for candy has evolved into dreams of skiing onto the international podium in the sport, and ultimately following his family bloodlines to the Olympic Games.

A top-notch student off the ski trails, the young McKeever has been making headlines in his mission for medals throughout his development pathway. He won two gold medals at age 11 at the Alberta Winter Games. At 15, he was selected to represent Canada at the World Junior Championships where he was the youngest competitor on the course. And at 16, he skied the opening leg in Canada’s historic silver-medal winning relay team at the World Juniors – the first ever podium in the event for Canada at the World Championships.

Today, McKeever is amidst a deep group of hot young prospects on the National Ski Team determined to climb Canada back onto the international podium in cross-country skiing while continuing their development towards the 2026 and 2030 Olympic Winter Games.

Two of those athletes also qualified for the head-to-heats in the senior men’s category on Friday in Sweden. After qualifying for the heats in 22nd spot, Ottawa’s 22-year-old Pierre Grall-Johnson came up just short in advancing into the semifinals after scrapping to third place in his heat, finishing 15th place overall in the World Cup tuneup.  Graham Ritchie – a 23-year-old from Parry Sound, Ont. – was fifth across the finish line in his opening-round matchup, placing 21st overall.

The top-two athletes in each heat, along with the next two fastest athletes overall advance to the next round.

Remi Drolet, of Rossland, B.C., also suited up but did not advance to the heats after qualifying 34th.

A handful of the Canadian men will be racing throughout the weekend at the Gaellivare Ski Festival, using the event as final preparation for next weekend’s World Cup Opener in Rukka, Finland